I have yet to meet a person that does not enjoy a spectacular cinnamon roll. Cinnamon rolls have this connotation to them, of cosiness, sharing and a feeling of togetherness almost. Who does not enjoy a buttery dough filled with more butter and cinnamon sugar? It just sounds amazing – butter, sugar and cinnamon. Nothing to me screams the holiday season more than gingerbread and freshly baked cinnamon rolls. After years of practice and trials of probably hundreds of different recipes, I have found the best of the best and mashed them into one, to create my very own Sourdough Brioche Cinnamon Rolls. They are just heaven, almost melting in your mouth, feeling the butter clogging your arteries, the sugar creating some nice cavities in your back teeth, exactly what I look for in a cinnamon roll. And I almost forgot – something healthy – add some apples, or my favourite, wild blueberries to your rolls and voila, something to make it “healthy.”

Brioche is one of my favourite types of bread to make, I love how fluffy and rich it is all at the same time, making an amazing marriage for cinnamon rolls! Adding some extra fillings to the inside of the rolls really adds some more breadth of flavour and adds the extra selling point to make your friends “get fat” as I tell my coworkers to do every day. My favourite filling is wild blueberries, and apples go great with the cinnamon. Adding the sourdough to the dough also adds depth of flavour, making the bread taste slightly sour to counteract the sweetness of the cinnamon sugar.

Until next time, Happy Adventuring!

Adding eggs to the bread for this recipe adds quite a bit. The yolk adds a bit of richness through its high-fat content. Overall, the egg adds moisture resulting in a perfectly fluffy and moist cinnamon roll.

The use of milk in this recipe does just as normal water would, but also adds some extra fat, and creaminess. The milk allows the dough to become more velvety and a softer crust by inhibiting the Maillard reaction that causes the crust to brown. This results in soft and fluffy cinnamon rolls without a crunchy crust.

The mix of yeast and sourdough provides the optimal rise and flavour combination. The yeast is what gives the rolls its fluff and puff, being the major contributor to its rise. The sourdough, on the other hand, adds quite a bit of flavour and a bit of rise as well. I love the mix of both, allowing there to be enough fluff, but also quite a bit of sour flavour counteracting the rich butter and the sweet cinnamon sugar on the inside of the cinnamon roll. If you don’t have a sourdough at home, I highly suggest making one, follow my super-easy guide to cultivate your own sourdough at home. Alternatively, you can replace the sourdough with another 5 grams of yeast.

Normally for bread, I would suggest to use bread flour or some other wheat flour that has a high protein content allowing for lots of gluten development. For these cinnamon rolls, I actually enjoy using all-purpose flour because it reduces the chew. This results in a really fluffy and soft cinnamon roll. 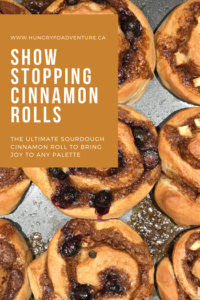 I love adding different ingredients in the following for my cinnamon rolls. Right before you roll them up, after you have spread the butter, sugar and cinnamon, spread approximately half a cup of your favourite type of filling and you’re good to continue with the recipe. Here are some of my favourite filling variations:

I find the easiest way to make bread is using the sponge method, by creating a sponge of sorts, that allows the yeast and sourdough to wake up, allowing for optimal dough rise. Start by mixing together your eggs, warm milk, yeast, sourdough and sugar together, to create a chunky yeasty beverage. The butter will not have melted all the way through, and neither would it have entirely incorporated into the mixture. The mixture should look like this.

Add the cinnamon and the first measure of flour to the mixture, and using a wooden spoon, mix it together, to create a sponge. When you are done, it should jiggle as such.

Let this mix rise in a warm and humid place, such as your oven, off with the light on, with a pan of hot water on the bottom shelf. My oven has a special bread proof setting, which turns the oven on to 100˚F, which is the perfect temperature for bread to rise, though I prefer rising my bread at 95˚F. Let this rise until it looks like it’s becoming a warty monster, it should be just full of bubble and be really light and fluffy.

At this point, add in the rest of the ingredients for the dough and mix it until it becomes a greasy ball of joy! It will feel quite loose with the large amounts of liquids and the butter would make it very greasy. Let this rise again in a greased or floured bowl until it has doubled in size. The best way to know when your bread is ready is to poke it! When you poke it, it should spring back just short of the original shape. If it does spring back all the way, it hasn’t had enough time to rise, and if it does not spring back at all, or only a little, unfortunately, you’ve over-risen your dough and there’s no fix to that other than starting again.

To get the filling ready, mix together the butter, brown sugar and cinnamon until it is light and fluffy. After it has risen, flour the dough and your work surface, and roll out the dough to a 24” long rectangle. It can be as wide as you like – the wider it is, the more layers you’ll have in the roll. I tend to not go much wider than 12”, as at that point it gets quite overwhelming. Spread the butter and sugar mixture all over the rolled dough until you have an even layer of it everywhere on the dough. Sprinkle on top the 200 grams of the additional topping if you’d like. Chocolate chips, blueberries, diced apple, cranberries, everything goes well with butter, sugar and cinnamon. Roll up the dough lengthwise and cut into 12 equal 2” rolls. I love to put them in muffin pans to get a perfect individual roll. If you choose to do that, add some brown sugar or maple syrup to the bottom of the pan to add some stickiness to the roll, they just taste amazing with the extra sugar. If you don’t have a muffin pan, a traditional circle or rectangle pan with parchment lining the bottom. Cover the rolls with a loose plastic wrap, and let them rise again, this time at room temperature.

When the rolls are ready, throw them in a (325˚F convection) oven, and let them do their thing! When they are ready, they should be golden brown and will spring right back (all the way this time). Enjoy them warm, great with a cream cheese icing glaze or a nice hot cup of hot cocoa. 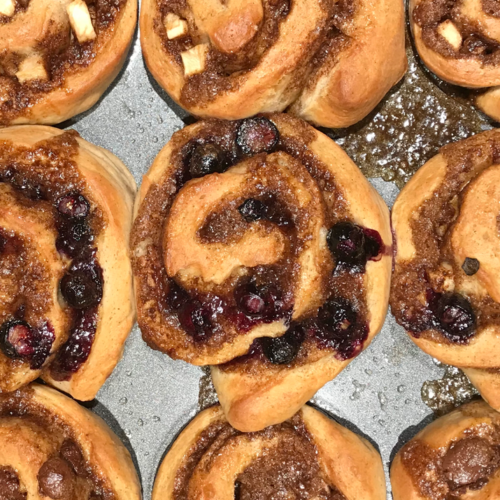 These Show-Stopping Sourdough Cinnamon Rolls are just heaven, almost melting in your mouth, feeling the butter clogging your arteries, the sugar creating some nice cavities in your back teeth, exactly what I look for in a cinnamon roll. And I almost forgot – something healthy – add some apples, or my favourite, wild blueberries to your rolls and voila, something to make it “healthy.
Prep Time 20 mins
Total Time 50 mins
Calories 197kcal

How to Cultivate Your Own Sourdough Starter

Hi! My name is Ahmed and I'm the brains behind Hungry for Adventure. I hope you have fun joining me on my adventures, happy adventuring!
We use cookies on our website to give you the most relevant experience by remembering your preferences and repeat visits. By clicking “Accept All”, you consent to the use of all the cookies. Review our Cookie Policy to learn more.
Cookie settingsACCEPT ALL
Manage consent